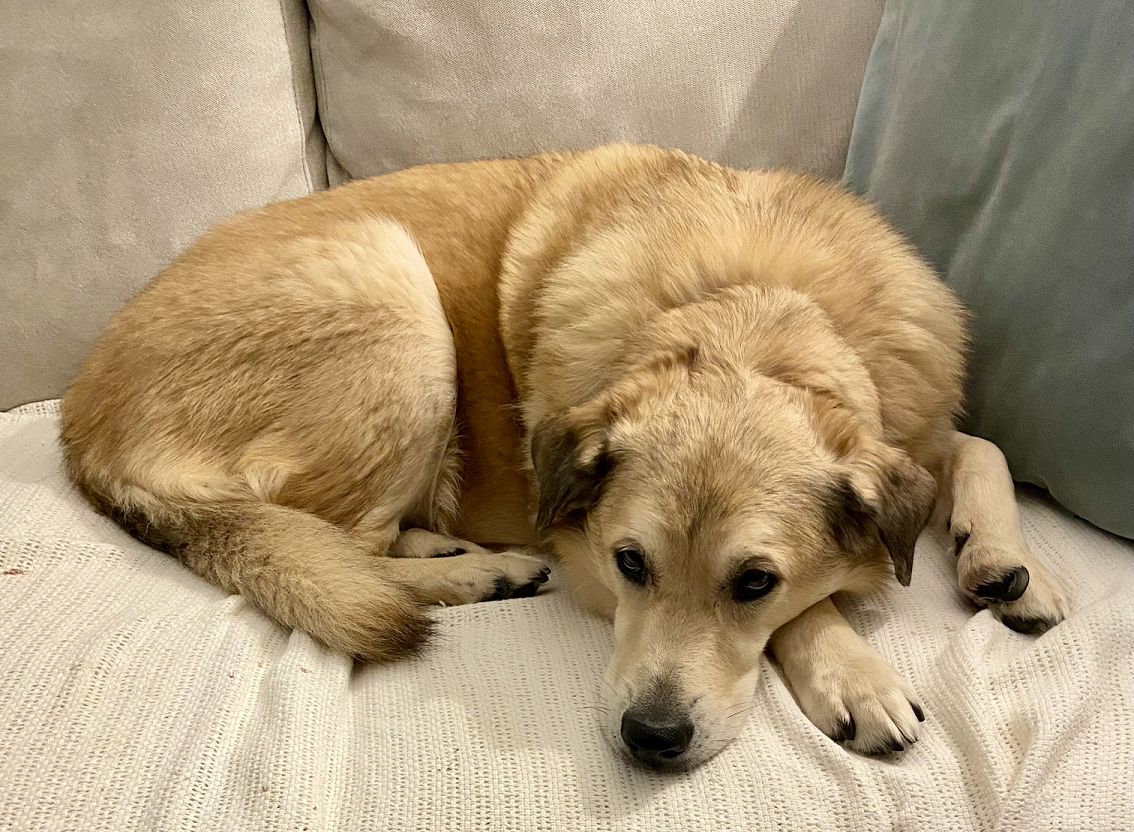 We rescued Luna in December 2013, about 8 weeks after our first dog died. Jenna, a Chocolate Lab we rescued in 2003, had slowed down in the late summer. She was 13 years old, and her decline was swift. When it was time to let her go, we knew it was time.

We agreed to wait a while—at least 6 months—to adopt another dog.

I began searching rescue and shelter websites almost immediately. I really missed having a dog at home. Our eldest daughter was in her first semester of college, our younger daughter was in high school, and our son was in middle school. I still had so much nurturing to do, and my human children didn’t offer a sufficient outlet.

I learned quickly that Luna was determined to take care of me. I’ve lost count of how many times in 408 weeks of living with Luna I’ve said, She is the shepherd and I am the sheep, how many times I’ve thought, I know technically I saved her life, but really she saved mine. When COVID began, bringing anxiety, fatigue, grief and loss into our lives, Luna remained a stalwart companion.

In the 122 weeks of living with Luna since her diagnosis of a terminal illness, these last 2 weeks have been among the most difficult.

Of course, the weeks following the discovery of the wound on her paw, which we’d later learn was a malignant melanoma, were more difficult. And the week of weighing our options was excruciating.

Still, once we decided the best of our bad options was to let her live, once we agreed on a treatment plan with our trusted veterinarian to “keep her comfortable and treat the symptoms until it doesn’t make sense to treat her anymore,” we were able to enjoy the weeks of her continued good health.

Those weeks stretched into months, and we accepted that she was living with, not dying of, cancer.

During these last 2 weeks we’ve returned to a state of heightened anxiety.

At first, we thought her loss of appetite and weight loss was a clear indication of decline. Then we hoped it was the result of an undiagnosed infection. She’d developed a UTI but didn’t exhibit typical symptoms until she was pretty dehydrated; when she started taking antibiotics and stool softener, she rallied. Wagging her tail and stopping to sniff Halloween decorations on our walks around the neighborhood, sunning herself on the back porch, hopping up on the couch to watch The Braves in a playoff game.

Then she refused the antibiotics.

After crushing the pill and hiding it in her food only to have her refuse to eat, after prying her jaw open to slip it between her teeth only to have her spit it out onto the floor, after confirming on the vet’s scale that she’d lost another 2 pounds, we were forced to admit our weeks of living with Luna—though they include some good days—are leading to an inevitable outcome.

I’m struggling with anticipatory grief, trying to enjoy the good days even as I witness her slow and steady decline. I can only hope that when it is time to let her go, we’ll know it is time.