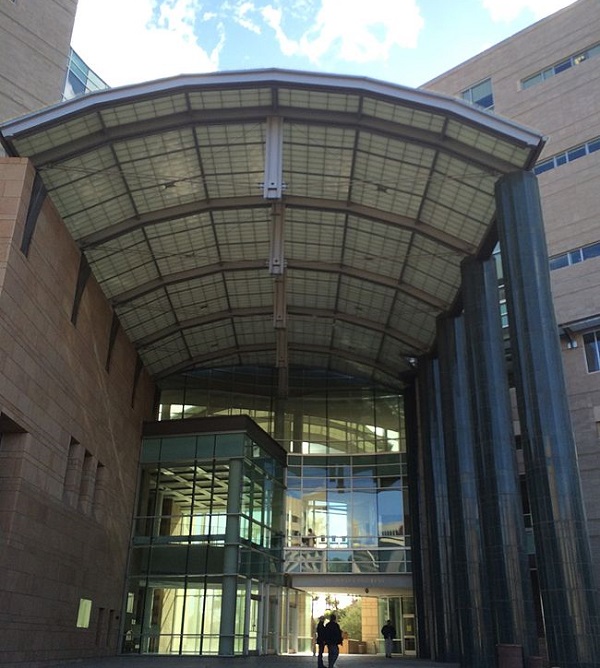 Bearing witness in the federal courthouse in Tucson, I begin to understand how complicated the issue of immigration is. The court proceedings of Operation Streamline may be efficient, but there is nothing easy about observing the criminal prosecution of frightened, desperate people.

In Nogales we learned about the criminalization of immigration. We heard about the desperation of migrants that traversed dangerous terrain and entered the U.S. to find safe haven and freedom, who were being detained in Eloy Detention Center until their court hearing in Tucson, and then being deported as swiftly as possible. KBI’s educators had prepared us for this experience, explaining the intricacies of the law, encouraging us to take notes and jot down questions for the judge, who would meet with us after deporting up to seventy migrants in under two hours.

I enter the courtroom ready to dislike this judge, already frustrated with the system, and ready to be angry with the judge for playing his role in it. How simple to be indignant and infuriated, and justifiably so. How unprepared I am for the messy, conflicting emotions that defy explanation and justification.

As soon as the judge is seated on the bench, a group of twelve to fourteen men and women shuffle in, their hands and feet in shackles. They are seated in rows of chairs and translation headsets are placed over their ears. The judge introduces himself and addresses the entire group, explaining the procedure for entering their pleas, reminding them to respond to his questions audibly and in Spanish. As he speaks, he makes eye contact with each person, stopping to inquire whether he can be heard, discovering on a few occasions that headsets aren’t working.

Then he calls the first group to stand behind the row of microphones with their lawyers beside them, so that he can address them individually. He calls only six or seven at a time, which makes the proceedings take longer but, in his opinion, less intimidating and overwhelming for the migrants, all of whom appear to be in their twenties, each of whom he addresses respectfully as Mr. or Ms., using their surnames.

In the first two groups, many of the cases are dismissed without prejudice, because the defendants are indigenous people that don’t speak Spanish and the judge cannot verify that they understand the charges against them. Crossing the border illegally for the first time is a misdemeanor with a maximum fine of $5,000; attempted re-entry is a felony, with prison terms of 30 to 180 days. Most of the migrants caught crossing for the first time are encouraged to waive their right to a trial and plead guilty to the misdemeanor, so the judge will reduce their sentences to time served and exempt them from paying fines. Those caught attempting re-entry usually plead guilty to the misdemeanor to have the felony charge dropped, but may be sentenced to additional prison time as a deterrent to subsequent re-entry attempts.

By the time the judge speaks to the fourth or fifth group of migrants, every person who has been in the courtroom from the start of the proceedings can recite his script. Trying to focus on each individual, I keep a tally of the number of defendants, writing each of their names and how long they’ve been detained, and sketching them in my notebook. It is warm inside the courtroom and some visitors are dozing, but the judge’s attention never flags. He is as fresh for the thirtieth defendant as he was for the first; he continues steadily without rushing, making eye contact with each defendant and listening carefully as they respond to his questions.

I’m sketching one man’s t-shirt design, expecting to hear the reply “si, señor,” when a woman hesitates and then whispers “no se” through stifled sobs. The judge gently instructs her to step back from the microphone and consult with her attorney. “It’s okay,” he repeats in a soothing tone. “I’ll call you up with the next group, if you’re ready. It’s okay.”

Later, when she returns to the microphone, her lawyer speaks on her behalf, explaining that she’d entered the U.S. illegally and had been detained for more than a week. Having failed to file the form to request a hearing in immigration court, which would establish her credible fear of returning to her country of origin, she panicked when the judge asked her to waive her right to a trial. She thought pleading guilty to a crime would disqualify her from seeking asylum. The judge orders the request be entered in the court record and then asks the woman if she’s ready to answer his questions. He speaks to her with patience and kindness.

In this moment, I realize it is not enough for me to acknowledge how complicated each migrant’s personal story is, nor is it enough for me to reiterate how complicated the whole issue of immigration is. Now I must face my own feelings of guilt for having misjudged another person. I should have suspended judgment and extended compassion to the judge as I did to the migrants. He served faithfully for more than six years in this court, and was only recently assigned to hear these cases, every afternoon for one week in a five-week rotation. Unable to excuse himself from this duty, he is committed to conduct himself with honor, by recognizing the dignity of every person in his courtroom.

For the judge sitting on the bench, his task is simple.

For me, KBI’s mission to complicate—to have me confront my own prejudices—is accomplished on this day in court.