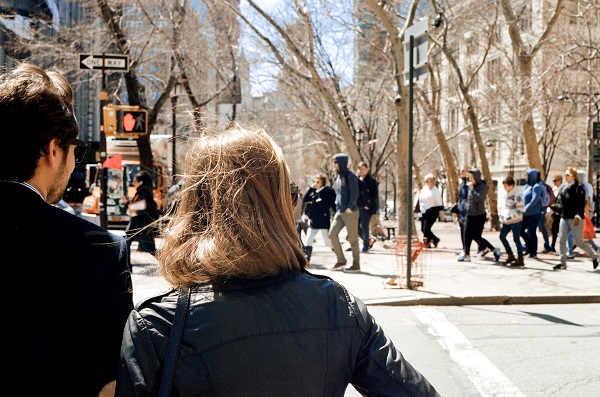 “Our life is a walk in the night, we know not how great the distance to the dawn that awaits us. And the path is strewn with stumbling blocks and our bodies are grown tyrannous with weeping yet we lift our feet. We lift our feet.”

This morning the mourners will get up from sitting shiva and take a walk around the block. This tradition, an act that literally propels the mourners outside and returns them to daily activities, is also symbolic of the change in a mourner’s spiritual state, from deep and overwhelming grief to a kind of sub-surface sorrow, one that allows for the return to daily life.

I will not accompany them, as I did when they buried their beloved husband, father, brother. I’m back at school this week, and I will be commemorating the first anniversary of the Parkland, Florida school shooting with my students—those who knew victims of the shooting and those who are remembering the text messages they received one year ago from cousins and friends that survived. Some students have prepared condolence cards for the families of the victims, which they will encourage everyone in school to sign.

While I sit with students and help them navigate memorial rituals, I think about the mourners guiding each other down their long, steep driveway to the end of the street, around the cul de sac and back home.

I remember the first time I drove up that driveway—it was a cold and rainy afternoon—and carefully turned my car around so I wouldn’t have to back out of it. I went to visit Marvin Cohen, of blessed memory, to talk about his life and, though I didn’t know it as I inched up the slippery driveway, to prepare him and his family for his funeral. I assumed this would be a single conversation, but I was wrong. I had the privilege to speak with him about once a week, for many weeks before his death.

In our first conversation, Marvin admitted that he wasn’t particularly devout, God-fearing, or what might be called “religious.” He cared deeply about being a kohen, a descendant of the ancient priests, believed strongly in raising his children with Jewish values, providing them with a Jewish education and celebrating the holidays at home. He felt it was important to be grounded in the Jewish traditions to feel whole, shalem, and at peace, shalom.

A few weeks later, Marvin invited me to be present with him as he blessed his children and recited birkat kohanim, the priestly blessing, for the last time in his life. When he was finished blessing them, I recited a few lines of a prayer for him, for his soul to be at peace. I knew this would be my last visit with Marvin and I wanted to bless him while he was still alive, as a way to thank him for allowing me to accompany him at the end of his walk in the night.

In the two weeks before Marvin’s death, my dad called twice to let me know that two of his close friends had died—one a friend of more than fifty years, the other a cousin with whom he had grown up and remained close throughout their adult lives. Just a few days before Marvin’s death, my friend of more than thirty years informed me a college professor and mentor of mine had also died.

Although I’m not a mourner—thank God, and may my parents enjoy good health and long lives—these recent deaths hit me hard. In my middle age, I feel I’m still young; I’m learning how to live in my own skin, even as I recognize it is now more freckled and wrinkled than it was when I was truly young. If the older generation is dying, won’t I have to step into the vacated position of wise elder? I’m not ready…

I walk around the block this morning, like every morning, with two dogs. We walk in the early morning, before sunrise, when the sky is dark as night. I walk and I pray: for the souls of the deceased and for those who mourn them. I pray for all of us as our bodies grow “tyrannous with weeping” that we have the strength and wisdom to be whole and at peace, and to lift our feet.