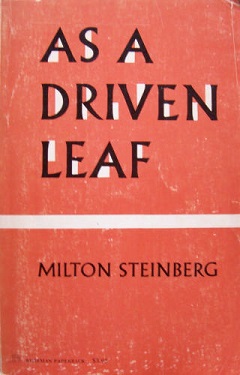 “The only really interesting questions are the unanswerable ones.” —Jacob Needleman

I’m not sure why I’ve been vexed lately by the question of why human beings seem so invested in deciding who is in our group and who is the “other.”

Maybe it’s the seemingly endless rounds of voting to choose the Speaker of the House. Maybe it’s the approach of the anniversary of the attack on the Capitol, stirring up memories of how easily we humans can resort to violence to get what we want.

While cleaning out my electronic files during winter break, I came across a blogpost from November 2011 when I wrote about this same topic. This appears to be a recurring question, one that remains unanswered. Maybe it’s unanswerable.

When my spouse and I merged our libraries nearly twenty years ago, we discovered that—despite his PhD in Physical Chemistry and my background in Talmud and Jewish Education—we each owned a well-loved copy of Milton Steinberg’s As a Driven Leaf. Steinberg’s life was cut short before he could publish his second novel, so this book stands out among the many achievements of his brief career. It chronicles the life experiences leading to the apostasy of Rabbi Elisha ben Abuyah, whom the rabbis of the Talmud refer to as “Other.” His life story remains a defining narrative of my rabbinate. I am constantly struggling with the question of otherness, seeking opportunities to blur the distinctions we make between “us” and “them.”

Today I heard a review on NPR’s Morning Edition of this year’s Pulitzer Prize-winning play “Clybourne Park.” I was struck by the comment of Northwestern University professor Bill Savage: “Neighborhoods can be communal places that support the members who live in it or tribal places that attack outsiders, or they can be both.” I have found this to be true not only of neighborhoods. When we organize ourselves in communities—whether they are religious institutions, professional organizations, political parties—we decide who’s in and who’s out.  Sometimes we are aware that our decisions hurt others, but often we overlook the ways in which we also damage ourselves.

What compels us to define our communities using the stark dichotomy of insider/outsider?  Why do we draw our lines in black and white, resisting the beautifully-blended shades of gray?

My goal is not to answer these ponderous questions. Instead, I hope that my career, like that of Rabbi Steinberg, will be defined by compassionate words and acts of kindness that help us live in the gray.

Eleven months ago, in the Daf Yomi cycle of Talmud study, we came across the story of an encounter between Elisha ben Abuyah and his student Rabbi Meir (Hagigah 15a). Rabbi Meir engages in a debate with his teacher and, with tenderness and compassion, tries to convince him to return. Like Rabbi Meir, I choose to hope that we can find our way back to each other.

“Not everybody is able to participate in real dialogue, where each person speaks from their feelings, and the other person receives them, like you do. The way I put it, the whole purpose of it is two grown-ups trying to listen to each other, and talking about things that matter.  Just as we’re going to do—or at least, as I want to do—about the question of hope.”

For more wisdom from the philosopher and religious scholar, Jacob Needleman, of blessed memory, listen to On Hope: A Conversation with Jacob Needleman.