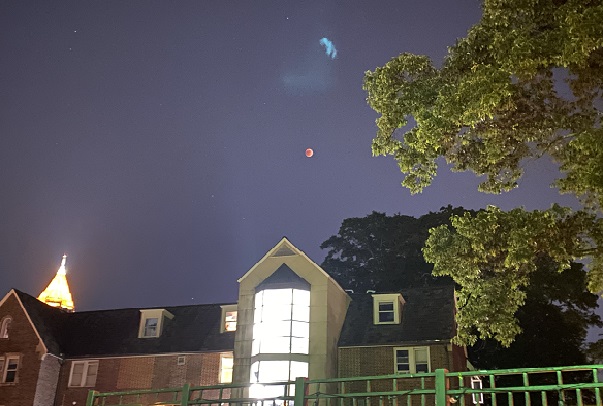 Voice Memo 1:
In the last ten minutes, seeing how it’s slowly disappearing, I can only imagine how the ancient people felt when they saw this. They must have been terrified, or at the very least baffled, confused. What was happening?! It’s very eerie, spooky, Jonah said. Henry doesn’t understand why we’re sitting on the neighbor’s stoop outside in the middle of the night.

Voice Memo 2:
Jonah told me that it would be a blood moon, almost red, but probably not until the peak, which might not be until midnight. It’s just 11 o’clock now, well 10:58. We came outside at 10:28, and at 30 minutes it’s about halfway there. It doesn’t look red yet, and I don’t know if I can stay up until midnight. The neighborhood’s really quiet. I don’t think anybody would notice us sitting here—me sitting here—Henry standing at attention.

Voice Memo 3:
I wonder if I’ll be able to understand the recordings that I’m making. I have my night guard in already and I’m in my pajamas. But when I saw that it wasn’t visible from our back porch, I realized I’d have to come down the street to get an unobstructed view. I’d already brushed my teeth and put in my night guard. So I wonder if I’ll be able to transcribe this in the morning.

I was also wondering if anyone in Glasgow set their alarm for 4 AM so that they could watch this lunar eclipse. I tried to take some pictures, but it didn’t work with the phone. There was too much glare. It’s moving more quickly, it seems, now. About ⅓ of the moon is still visible. Henry finally sat down, although he’s looking around, keeping watch to keep me safe, or maybe looking for lizards. I’m not sure.

After sitting here for a half hour, I’m wondering if my knees are going to allow me to stand up and walk up the hill to home.
But it’s worth it.

Voice Memo 4: It’s 11:15, coming up on 45 minutes. There’s a crescent left… well, it’s not the shape of a crescent. It’s hard to describe. I should have brought my sketch pad with me instead of my phone. It’s starting to glow a little bit reddish, more orange. It’s really weird. A strange phenomenon. Henry finally laid down. He doesn’t really see the point of this sitting outside late at night. But I’m really glad we came back out.

Voice Memo 5: It’s just the tiniest edge now. I’m waiting for it to disappear, and it’s glowing—I don’t know if I’d say orange, but yellowish-orange—from behind. Henry’s definitely losing patience, although he did lie down for a brief spell. It’s 11:29, one hour and one minute since we first came outside.

I’d love to come out in half an hour again, just to see if it really is red at midnight. But I think when this tiny little wisp is gone we’re gonna head inside and go to bed. I have an early day tomorrow.

This was most definitely worth it. Goodnight, Moon.