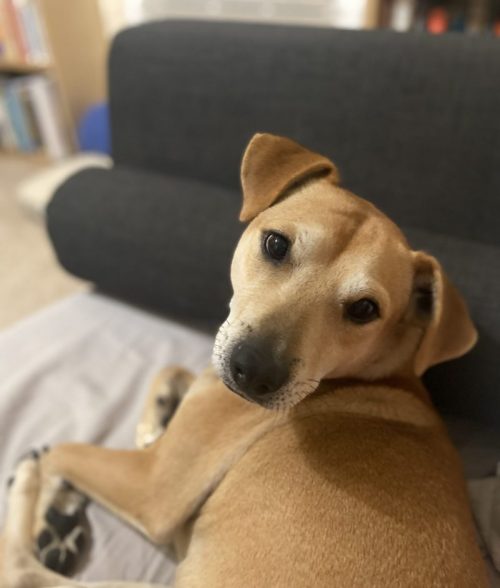 My spouse recently pointed out to me that, although my blog is advertised as “Reflections about my life, and about the dogs and humans that I love,” I haven’t written about the dog who is currently my favorite canine companion.

This kvetch contains a partial truth: I haven’t written a blog post about Henry. However, I’ve definitely posted about Henry on Facebook. According to my count, there are 121 photos of Henry on my phone, and I’m fairly certain I’ve shared more than half of them since October 13, 2020.

So I thought I’d write about Henry today, on Thanksgiving, and express my gratitude to Atlanta Lab Rescue for bringing him into our lives.

Some of you already know the backstory. Remembering our first dog, a gentle and lovable Lab, I’d contacted Atlanta Lab Rescue about adopting another dog. At their suggestion, we decided to meet male dogs that might get along best with Luna. There were two beautiful, black Lab-mixes on their website, but both were over 65 pounds. And we already had a 60-pound shepherd-mix.

Then, I saw Henry’s picture. He didn’t appear to have an ounce of Lab in him and he looked pretty scrappy, with his docked tail, scarred paws and smooth chest where his fur was slowly growing back after a yeast infection. Still, I was taken in by his wrinkled forehead and soulful eyes.

When the volunteer at Atlanta Lab Rescue explained how Henry got to Atlanta, I knew we had to meet him. They’d traveled to rural Alabama to pick up 2 Labs from a county shelter there. When they arrived, they found 4 other dogs in this shelter and, since the odds were these dogs would be euthanized, they decided to take all 6 back to Atlanta, where they could board and socialize together until they were adopted.

Henry came to walk around the neighborhood with Luna. We were supposed to keep them on opposite sides of the street, but Luna kept pulling me over to greet him. Then we sat on our back porch and both dogs were content to be together. We agreed to care for Henry for three weeks before the adoption would be finalized.

He wasn’t officially ours until early November, but he was part of our family immediately. Even his shelter name, Henry, seemed to fit in with our other dogs’ literary names: Luna [Lovegood], our daughter’s dog, Oscar [Wilde], and [O.] Henry. Or, as I call him when he’s being playful, “Oh, Henry!”

The truth is I’ve written plenty about Henry. About a month ago, I wrote an email about Henry and sent it to the director at Atlanta Lab Rescue. Here’s an excerpt:

“We celebrated the 1st anniversary of his Gotcha Day 2 weeks ago and can’t believe how lucky we were to have this goofy, good-natured pup come into our home. He took to training easily, and thrived on routine and being with his humans. He’s been adjusting to recent changes in our home—our son moving back to college, David going back to work, and the death of our older dog—with remarkable resilience. He loves hanging out with the neighborhood kids and trying to eat their sidewalk chalk.”

Today, I’m writing about feeling grateful to spend Thanksgiving with two of our adult children and our two literary canines.