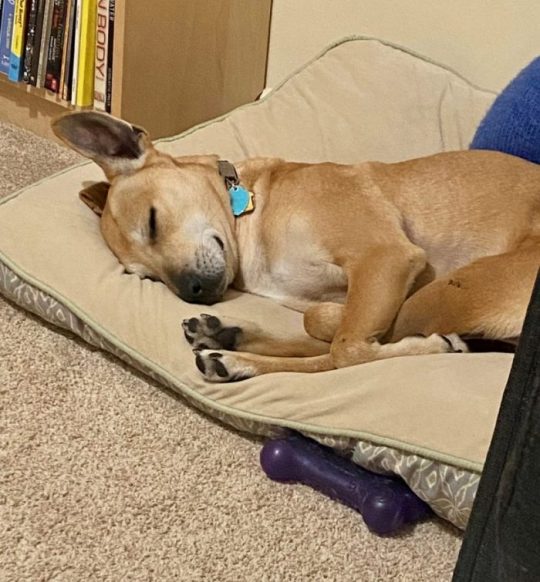 To celebrate, I’ve decided to participate in the 2022 April Poem A Day (PAD) Challenge. Of course, I’ll miss a few days for Sabbaths and Passover, but I’m not concerned since it’s just for fun. So far, it has been great fun to respond to the prompts, posted daily by Robert Lee Brewer. I’m enjoying keeping the poetry-writing muscle engaged by playing in the poetry sandbox for 10-15 minutes each afternoon.

Sunday’s challenge was to write a “smell poem.” I’m sure the fact that Henry was sleeping nearby as I read the prompt influenced my response. Though I must confess, while he was close enough that his soft snores reached me, his smell did not. I would have needed to curl up on the pillow with him to catch of whiff of his unique body odor.

I married thirty years ago.

He loves this dog.

has a strange smell,

which is a kind of hound.

Henry the mutt, his breed

some kind of hound,

with some kind of odor.