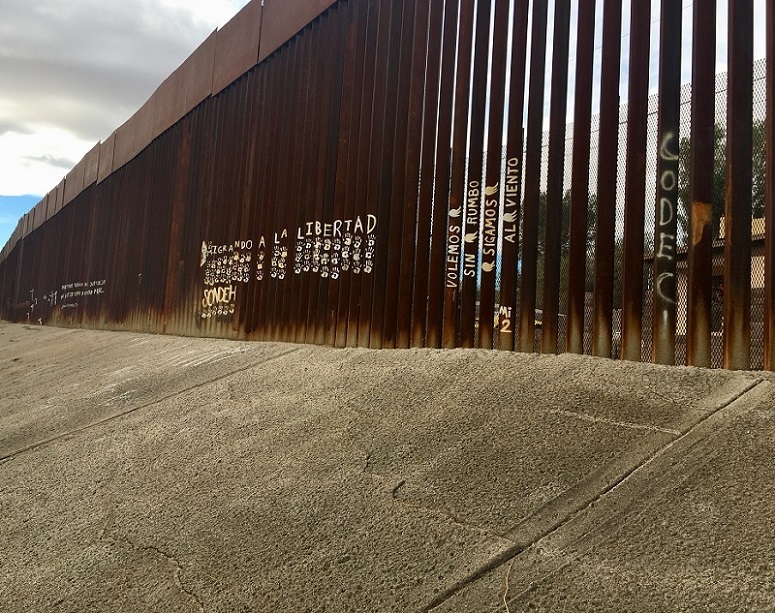 Before I built a wall I’d ask to know
What I was walling in or walling out,
And to whom I was like to give offence.
Something there is that doesn’t love a wall,
That wants it down.  —Robert Frost 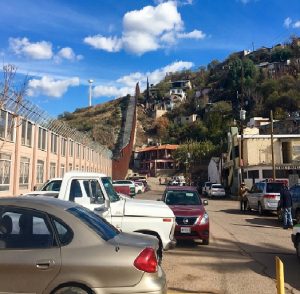 We begin our walking tour of downtown Nogales at the DeConcini Port, before crossing an overpass and gazing at the lines of cars and trucks waiting to cross into the U.S. on the highway below. We make our way toward the pedestrian waiting area to stand alongside the building and learn about the wall, and immediately notice the disparity between this port of entry and the beautifully renovated Mariposa checkpoint, where we travel between Mexico and the US with ease. The building looks like a prison, with its concrete walls, metal bars and razor wire. Mexican citizens wait in an endless line that reminds me of the crowds at Universal Studios, and there is a man outside, playing guitar and singing folk songs, to make the wait more bearable for his compatriots and perhaps collect a bit of cash.

Katie points out the shiny razor wire, installed by US military troops just weeks ago, which is a stark contrast with the rusted beams that reach up the hill toward the sky. She explains this wall was built decades ago; it covers about three miles through downtown Nogales, extends about a mile over the hill beyond our view and another two miles in the opposite direction, until it reaches the desert and surrounding mountains that provide a natural border and formidable barrier to crossing it. Since 1994, when President Clinton walled off the urban points of entry along the border, more than 7,000 people have died attempting to cross into the U.S. We hear stories of many who drown in the Rio Grande, but the largest percentage of deaths are among those crossing the Sonora desert. 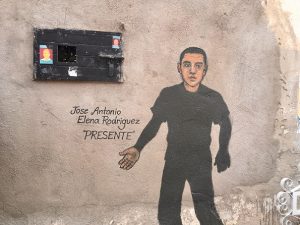 There have also been deaths along this wall. We walk back along DeConcini through the streets until we arrive at the memorial site where 16 year old Jose Antonio Elena Rodriguez was shot by a U.S. Border Patrol Agent, who fired 16 rounds through the fence—one for each year of Jose’s life—claiming he was defending himself against the threatening youth throwing rocks.

Standing across the street, judging the vast distance stretching before us to the other side of the wall, I cannot help but wonder who is David and who is Goliath in this story.

As we walk on, we stop to read messages painted on the wall and on wooden crosses hanging on it. We walk together, but separately, silently praying for those who have walked this path before us. I’m still thinking about 16 year old Jose and my own 16 year old son, when we arrive at the site of a tribute to the Caravana Trans-Gay Migrante that arrived in July 2017.

I stop here to take multiple photos of all the messages on the wall. Later, I will send them to my daughter with a only brief explanation about this caravan of LGBTQ people seeking freedom from persecution. She will cry, as I did, when she reads the words on the wall: “Libre pasa para trans,” “Solidaridad para los gay,” and “Unidas chicas trans.” Although the LGBTQ people we love are generally safe in Atlanta, they are not free from discrimination and are not equally protected under Georgia law. 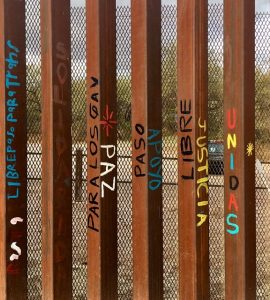 I only vaguely recall hearing about caravan in the news and I’m afraid to ask Katie what became of these migrants, worried they were returned to their countries of origin to face violence. I’m relieved to learn that KBI assisted the women in finding safe shelter in Nogales until they were granted asylum in the U.S. I’m not surprised to hear that KBI treated the members of the Caravana Trans-Gay Migrante with compassion and kindness, fulfilling the mission to humanize and accompany migrants, embodying the biblical teaching, “Love your neighbor as yourself.”

I find it impossible to stand before this intimidating structure, which walls some in and others out, and not feel the ache of despair. I cannot believe God wants us to mend and tend this wall, and repeat the mindless refrain, “good fences make good neighbors.”

I pray for us to reach higher than this wall to embrace one another in love, to walk around this wall to meet each other on equal footing. I pray for the strength of the human spirit to overcome fear and seek peace.

My heart holds no love for this wall and wants it down.